Two attempts had been made by others to build two high-rise condo towers on the site of the former Gaslight Square retail strip at 10th Ave and 4th Street SW, Calgary, Alberta. Centron, a developer, decided to buy it and changed the concept to a single building, mixed-use office retail development. The site was already excavated and seven levels of underground parking completed so a considerable amount of structural redesign was necessary; which includes the upgrade on the existing foundation system.

Designed by RWH Engineering, 80 micropiles are installed 20 to 30 feet below the existing footing to support the additional load. As the installation was undertaken in a 7th floor underground parkade, HCM had to deal with limited access and low overhead clearance. Man-portable drilling equipment was used to compile with these limitations.

Despite the challenges, the project went well with HCM scope of work being completed on schedule. The pile capacity is confirmed by one verification test and five proof tests.

The Great Lakes Copper Plant in London, Ontario, posed a technical challenge in shotcrete shoring. HC Matcon helped to facilitate the installation of a new copper roll press. The shoring was completed inside a fully operational copper plant at night and on weekends. Special care was taken to ensure dust and overspray was contained within the work area causing minimal clean up and ensuring the plant was fully functional throughout the process.

HC Matcon, along with Blue-Con Excavating and McKay Cocker (GC), completed the 2,200ft2 shoring in less than three weeks.

HC Matcon’s project at the Siemens Energy Blade Plant consisted of the design, supply & installation of 70 helical piers within the existing plant location in Tillsonburg, ON.

As the project was located in an existing, active manufacturing facility, extra care had to be taken on the part of HC Matcon to work within the confines of the building space, which included tight egress for our equipment and limited head room clearance (20′+/-).

Safety is always a number one priority, but additional attention had to be paid as the work was being completed within an active plant with live personnel maintaining scheduled productions.

Some unforeseen obstructions were encountered during helical installation, but with quick decision making and our crews efficiency, HC Matcon was able to complete the project on time and on budget.

The Fuse at Evolution

Following years of planning by the City of Calgary, construction on the anticipated East Village Development has started. The proud owners of the first land deal in EV in over a decade have committed to building about 700,000 sq. ft. of mixed-use residential property starting with The Fuse at Evolution.

HCM has also secured contracts on the next two East Village developments that include the long anticipated National Music Centre and First Condominiums. HCM is proud to be a part of this landmark development which is considered to be a turning point in East Village history and a transformative moment for EV.

On this project, HCM, in conjunction with its in-house engineering company, RWH Engineering Inc. (RWH), was able to offer the owner one source for the design, supply, and installation of a complete temporary shoring system and precision monitoring services.

RWH produced an efficient design that conformed to AREMA railway standards and resulted in savings to the owner, in comparison to the original tendered drawings. The RWH design included a double pile and lagging system with 17.5 meter long tiebacks, required due to the soft soils. In addition, HCM installed 275 mm diameter permanent micropiles at the base of the shoring. The micropiles extended through 12 meters of soil and were founded 5 meters into bedrock to provide the required capacity.

The general contractor benefited from working with a single source that could take responsibility for all aspects of the shoring and deep foundations work – guaranteeing quality and reducing costs.

During the bidding process, HCM proposed an innovative design-build shoring solution for the 144 Park Street project, a 19 storey condominium in the downtown core of Waterloo. HCM was retained by Mady Developments to design, supply, and install a complete 9,500 SF bypass shotcrete shoring system.

RWH Engineering Inc. (RWH), an HC Group company, took on the design and monitoring responsibility for the project. The design consisted of a tied-back bypass shotcrete shoring system to a depth of approximately 5 meters. Bypass shotcrete is a unique solution developed by HCM which combines the benefits of shotcrete with a traditional piling system. 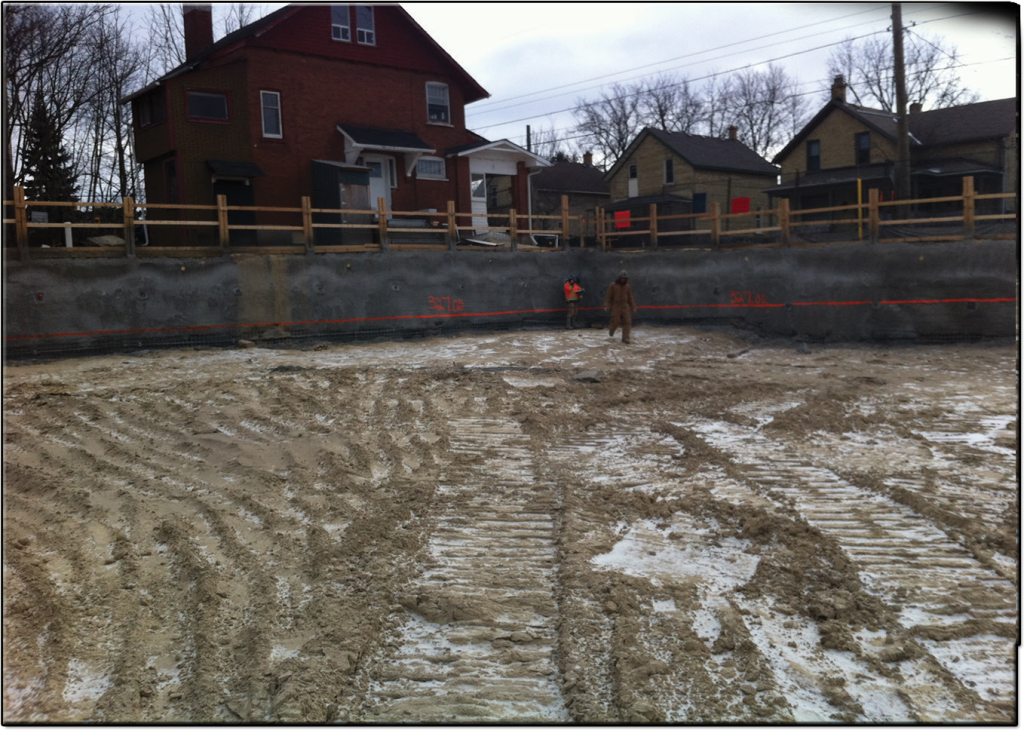 The HC Group team is positioned to provide exemplary service when performing design-build work – providing both cost and schedule savings to the project.

This project involved approx 41,000 sf of piles and lagging temporary shoring system. The project was broken into two phase both consisting of piles and lagging with both rakers and tiebacks in order to avoid conflicts with neighboring properties. HCM along with RWH design and constructed the shoring system to meet the project scheduled and owners budget. By using in house engineering HCM was able to respond to changes in of the project quickly and effectively to ensure the project was completed on time.
Included on this project is:

HCM worked closely with the General Contractor to ensure the shoring systems were built efficiently and as per the designs and specifications. In addition, together we were able to accelerate the overall project schedule.

HC Matcon completed a 1,650ft2 structural shotcrete wall in just two days of shooting concrete. The wall had a depth of 0.450m thickness and was (on average) 10m in height.

The first day, Matcon placed a scratch coat at 0.400m thick, and then a surface coat at .050m thick on the second day. Since no form work was used, there was no need for stripping and finishing the wall.

This was the first structural shotcrete wall for both HC Matcon and EllisDon Construction.

This project, located on Fourth Street in the downtown core of Calgary, consisted of a tied-back continuous caisson wall.  The caisson wall provided zero ground loss and minimal water infiltration, an important feature in the high density area of downtown.  HCM was able to call upon experience from similar successful past projects, such as the installation of a tied-back continuous caisson wall for the new Mustard Seed Building on Tenth Avenue and Centre Street S.E., to ensure a successful project.

This project is another example of HCM’s ability to work with a General Contractor to execute a successful shoring project with a tight schedule and budget.

HCM was contracted to provide the design and installation of shoring system for a 110 unit building consisting of town homes, studios and condos. This development was located at 1037 Second Avenue N. W. Calgary, Alberta. HCM, in conjunction with RWH Engineering, designed, supplied and installed a tied-back continuous caisson wall.

The shoring was designed for a maximum excavation depth of 10 meters below grade for a total of approximately 18,900 square feet of shoring area. The soil conditions consisted of gravels with the presence of ground water, making the continuous caisson wall the superior solution due to the zero ground loss and minimal water infiltration advantages.

This project had strict timeline requirements and called for the shoring to be completed in 28 days. In order to finish the project on time, HCM had to use double shifts and injection anchors to double the anchor production. The steps taken by HCM were successful and the project was finished within the given deadline. 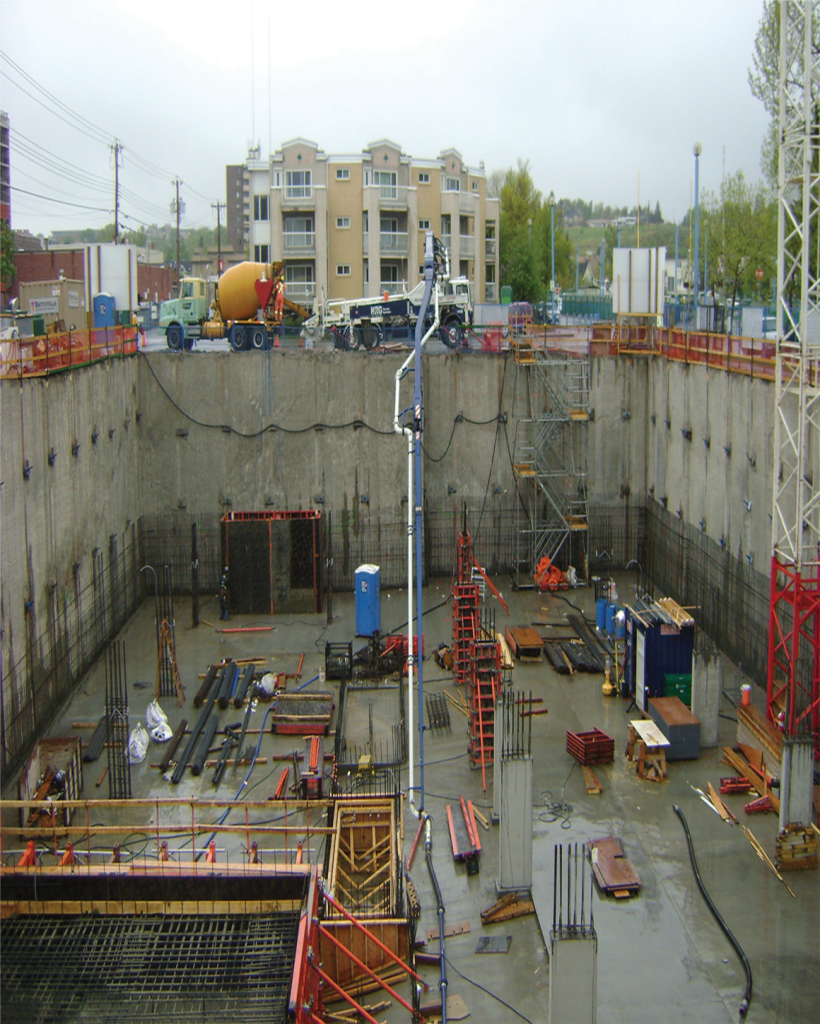 The expansion of Mapleview Drive in Barrie required track protection for an existing railway overpass. HCM was retained to install a strutted piles and lagging shoring system. RWH Engineering Inc. (RWH), an HCM Group company, engaged the design responsibility for the project, resulting in significant improvements to the tendered drawings. HCM and RWH redesigned the shoring system to better suit excavation and bridge footing construction. The redesign revised the center pier shoring system from a boxed in strutted system to a tieback shoring system. This allowed better access for shoring installation, excavation, and forming.

Due to site conditions and steep slopes, HCM coordinated all drilling platforms with the GC which optimized shoring and excavation activities and maintained the project schedule. Coordination with the GC for the temporary bridge placement was paramount as track removal and temporary bridge and track installation had to occur in a time period of four days. 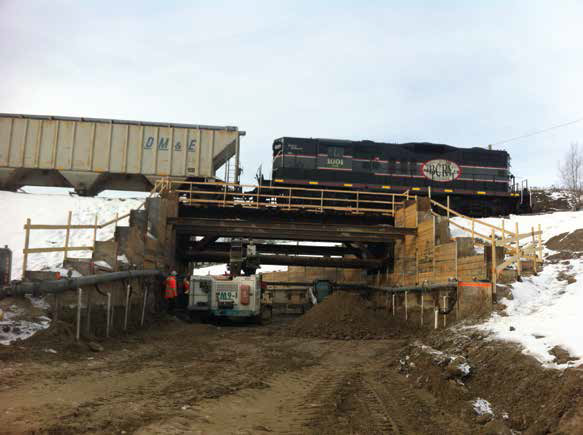 Significant time-saving was realized during installation by redesigninig the tendered sheet piling and driven piles close to existing tracks with an extended drilled double pile and lagging.

The work was successfully completed on time and on budget. This project exemplifies HCM’s ability to find cost-effective solutions to complex project requirements.

Manage Cookie Consent
To provide the best experiences, we use technologies like cookies to store and/or access device information. Consenting to these technologies will allow us to process data such as browsing behavior or unique IDs on this site. Not consenting or withdrawing consent, may adversely affect certain features and functions.
Manage options Manage services Manage vendors Read more about these purposes
View preferences
{title} {title} {title}